Everything (almost) I know about the Wanhao Duplicator i3 Plus 3D printer and its clones.

Note: This document is updated with information about other printers like the Wanhao Duplicator i3 Plus Mark II.

I am not affiliated, associated, authorized, endorsed by, or in any way officially connected with Wanhao, or any of its subsidiaries or its affiliates.

USE THESE INFORMATION AT YOUR OWN RISK. I am not responsible for any damage done to your printer or LCD when using these information. I hope you find them useful, I try to make them as accurate as possible but they may contain mistakes.

Become a Sponsor of the ADVi3++ project

I have created ADVi3++, an alternative, better and open source firmware for Wanhao i3 Plus printers and clones. Thanks to supporters of this project on Patreon, I am able to continue the development of this firmware and write articles such as this article. More information about ADVi3++ on GitHub: https://github.com/andrivet/ADVi3pp. More information about supporting the project on Patreon: https://www.patreon.com/andrivet.

The Wanhao Duplicator i3 Plus 3D printer (and all its derivatives) is manufactured by Wanhao, a Chinese company in the town of Jinhua. It is sold by several resellers like Ultimate 3D Printing Store in the US, 3D Prima in Europe, but also Amazon, Aldi in Australia, etc.

Like several 3D printers, it is a derivative on the Reprap Prusa i3 but with several differences including a LCD touch screen.

In this document, I will try to describe everything I know about this 3D printer, regarding hardware and software. Do not expect a review or guides to do this or that. This document is about technical details, deep details.

There are today many different models with or without significant differences. I have open an issue on GitHub to reference all the different models and get input from the community: https://github.com/andrivet/ADVi3pp/issues/188. As far as I know, here are an exhaustive list of models derived from the Wanhao Duplicator i3 Plus:

There are currently (at least) two different models of LCD panel:

The LCD panel has the following characteristics and components:

There are differences between the two LCD panels. In particular:

For complete characteristics, look at the datasheets. On the board, it is possible to read the name of some chips:

The name of other chips has been intentionally erased, probably to protect the Intellectual Property. 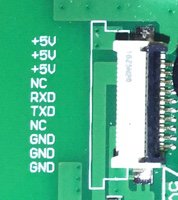 The connectors are different between the two model of LCD panels, but the pinout is the same:

The cable is a standard 1.0 mm pitch flat flexible (FFC) jumper cable (type B / type 2 - contacts are on opposite sides at each end of the cable).

Contrary to previous versions of Wanhao i3 printers (that were using a Melzi board), the Wanhao i3 Plus has a custom mainboard. The version is different between models:

The mainboard runs an Atmel ATMEGA2560-16AU microcontroller. It is thus the equivalent of an Arduino Mega 2560 clone.

Some of the components of the motherboard are the following: 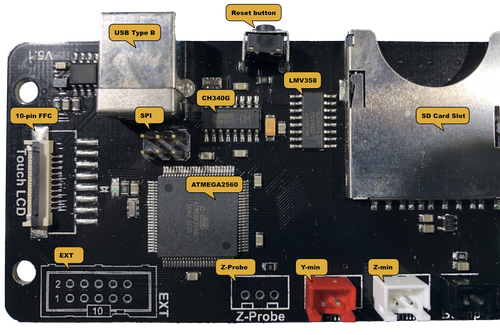 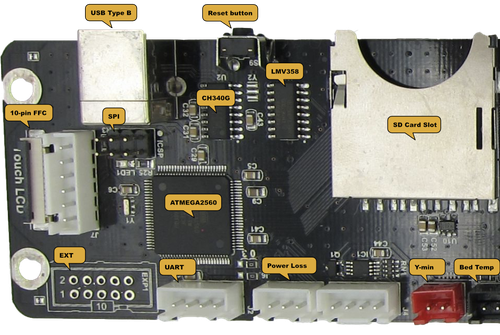 Wanhao Duplicator i3 Plus Mark II mainboard (5.4) Back side 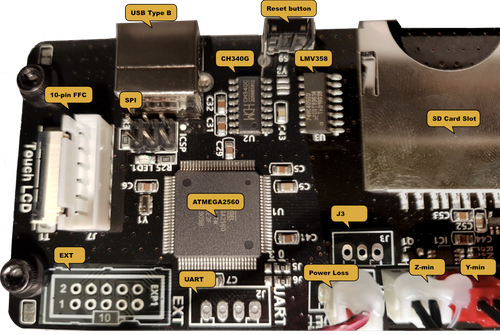 The following table describes how the Atlmel MEGA2560 microcontroller is used and the corresponding definitions in the Marlin firmware for the different mainboards: 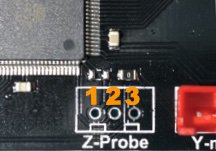 The Z-endstop is not present on Mark II

Serial Peripheral Interface (SPI) is a synchronous serial data protocol used by microcontrollers for communicating with one or more peripheral devices quickly over short distances. The pinout is the following: 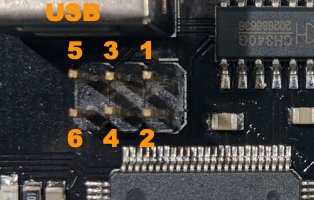 Note: The EXT connector pinout is the same for all models, including Mark II and HE180021

This board is in the back of the printer and is connected to the mainboard by a 16 or 20 (Mark II) pins IDC connector.

The pinout of the 16 pins IDC connector is the following:

WARNING: The connections shown in the diagram below are in part based on guessing. So take them with caution. I have ordered a Mark 2 interface board, so I will verify my schema once I receive it.

The pinout of the 20 pins IDC connector is the following (take this with caution):

Note: I guess that BL-SIG and VCC are there to be able to support a BLTouch sensor. There is apparently a special Interface board with a connector for BLTouch. 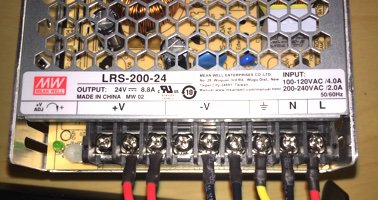 WANRING: Your motors can differ slightly. 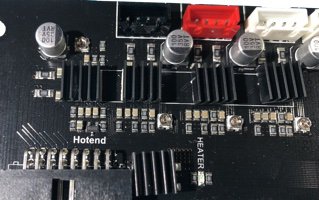 The drivers (hidden by heatsinks) are Allegro Microsystems A4988ET. The datasheet is available on the web site of the constructor.

WARNING: The orientation of the cable is switched. 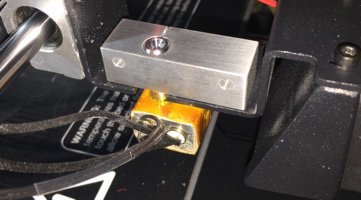 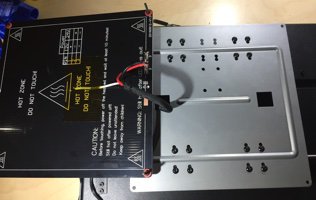 The Wanhao Duplicator i3 Plus Mark II has an inductive proximity sensor for automatic bed leveling. Depending of when the printer was manufactured, the sensor is either blue or orange. 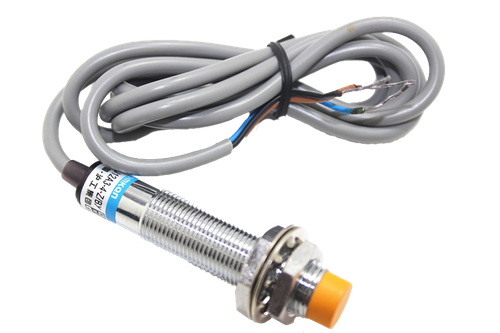 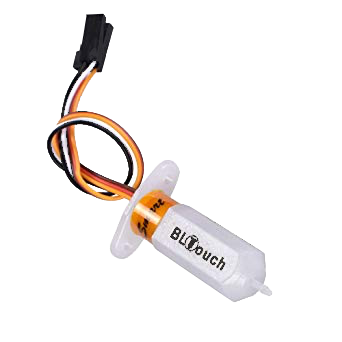 It is possible to upgrade the Wanhao Duplicator i3 Plus printers (non Mark II) with a BLTouch using an alternative firmware: ADVi3++ (I am the creator of this firmware).

The Aldi Balco 3D Printer HE180021 (5.2C) is able to shut itself down after a period of inactivity (10 minutes). This performed using an additional device.

The Mark II printer is able to recover from power loss using this device:

For the moment, I have very few information on this subject.

The LCD Touch Screen is build around an ARM kernel and simplifies the development of user interfaces: the different screens are defined by a set of files (images, fonts, etc) stored in the flash memory of the panel and they can be customized using a graphical editor (part of DGUS SDK).

The images have the following format:

The last point is very important. The LCD (i.e. DGUS) is not able to handle other formats like top-down bitmaps. To convert images to the right format, you can use ImageMagick convert: 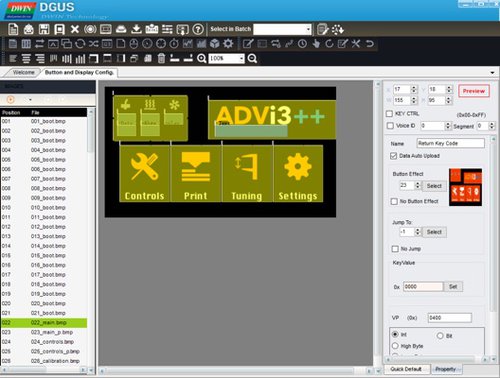 LCD resources can be flashed by inserting a microSD card into the slot of the screen.

The microSD card has to be formatted with the following parameters: FAT32, 4096 bytes per cluster (i.e. 8 sectors). To format under Linux (and macOS with the dosfstools Homebrew package):

Of course, replace /dev/disk2 with the right value.

Of course, replace G: with the right volume letter.

The following files are changed (changes in comments are ignored):

The changes are the following:

Most of the changes (such as for the second serial line or the Mini LCD) have nothing to do with the Wanhao i3 Plus, but deal with MakerLab Maker printer.

There are alternative firmwares for these printers ("alternative": not made by Wanhao) such as: