The differences between MINI DGUS and DGUS are listed below:

In this version some functions have been excluded, among them the CRC Checksum, firmware update using SD card, user-defined baud rate, Firmware Parameter Config setting, Timer Variable and DWIN OS.

There is also a DGUS II which is another generation of the DGUS (not the DGUS MINI).

Examples of such MINI DGUS panels are:

This document is freely translated from the Chinese document MINI DGUS 屏用户开发指南 (Version 2.3 2015.08) with some information taken from other documents such as the English DWIN DGUS Display Development Guide Version 4.3 and some of my own researches.

As I found the original order of chapters confusing, this document uses a different order. Pictures are my own.

Note: I am not affiliated directly or indirectly to DWIN Technology nor endorsed by them. This is my own work for my own purpose (I am developing a firmware for a 3D printer using a MINI DGUS Display). USE IT AT YOU OWN RISK.

There are several versions of the SDK available. Some are for the latest version of the hardware (i.e. DGUS II), some for DGUS and DGUS MINI. Some are translated in English, some only partially. For DGUS MINI, I found that the following SDK works relatively well:

More recent versions (like 7.x or 8.x) may work but are, in general, only partially translated in English.

The MINI DGUS Display can be flashed by using its microSD slot (on the right): 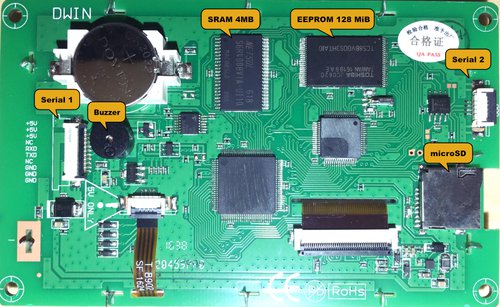 The microSD card has to be formatted with the following parameters: FAT32 4096 bytes per cluster (i.e. 8 sectors)

To format it under Linux (and macOS with the dosfstools Homebrew package):

Of course, replace /dev/diskN with the appropriate value.

Of course, replace G: with the appropriate volume letter.

All files are placed in a DWIN_SET folder, itself in the root of the SD card. These files are typically:

Some system settings can be configured by creating a CONFIG.TXT file inside the DWIN_SET folder. This is a simple text file with the following format:

Important: The default values for UART_SYNC_H and UART_SYNC_Lare 5A and A5.

For information, the modes are defined as:

Due to TCON difference on display, there are two kinds of initial displaying data and R4 is used to setting the timing relation of the input data and clock:

These three registers control the back light if TP_LED (register R2 bit 5) is set to 1.

IMPORTANT: This is not documented in the original Chinese document. If you create a CONFIG.TXT file in the DWIN_SET directory with content:

it reformats the LCD display: all the images are erased and the default settings of the LCD are loaded. During the process, the screen becomes blue. When the process is finished, it becomes white-gray.

Insert the microSD card inside the slot of the MINI DGUS Display (on the right side in this picture):

The display turns blue and the flashing process begins. After a few seconds, every image is displayed one by one. When the sequence of images stops, you can remove the microSD card and power-off / power-on the display.

Tap very quickly on an area of the display that is not a button. You have to tap 20 times in less than 4 seconds. When entering calibration mode, the display emits a long beep and turns blue.

Follow the instructions on the screen (such as Press The Cross Dot In Left_Top.) and when it is finished, the display returns to the starting page.

Add a line with TP_CORRECT in the CONFIG.TXT file inside the DWIN_SET folder. Then place the microSD card in the slot (like for flashing). When entering calibration mode, the display emits a long beep and turns blue.

Follow the instructions on the screen (such as Press The Cross Dot In Left_Top.)

When the calibration is done, remove the microSD card and then remove the TP_CORRECT line in the CONFIG.TXT file.

Note: Some documents (from DWIN) indicate to create a CONFIG.TXT in the root of the microSD card. From my own tests, this is wrong. The file has to be in the DWIN_SET folder.

WARNING: Failure to input correctly the password will definitively lock the SD slot.

The MINI DGUS Display uses these formats to represent data:

The MINI DGUS Display uses 96 MB of Flash memory to store 350 pictures. The images have the following format:

The last point is very important. The LCD (i.e. DGUS) is not able to handle other formats like top-down bitmaps. To convert images to the right format, you can use the Image Converter provided with the DGUS SDK or image editors such as Photoshop. You can also use ImageMagick:

The MINI DGUS Display provides 256 registers used to control the behavior of the system:

Notes:: Sizes are in words (2 bytes). * All values are in Big Endian

In order to simplify the display of the real-time curves, the MINI DGUS Displays have a curve data buffer for buffering the user's curve data. This buffer does not occupy the data memory space and can buffer up to 4 curves at the same time (2 for 02 series).

Curve data buffer can only be written in words, and the data for each curve point is represented by a 2-byte signed integer. It is possible to clear the first and second curves by writing 0x5A or 0x5B to the 0xEB register.

Data frames consist of up to 4 blocks as described in this table:

Notes: The default values for R3 (UART_SYNC_H) and RA (UART_SYNC_L) are 5A and A5. So the frames begin with the bytes 5A A5. * All values are in Big Endian. The maximum data length that can be transmitted is 248 bytes. It is not clear if MINI DGUS Displays are able to support CRC like DGUS displays. Some parts of the documentation suggest it is the case, but the data sheets suggest the contrary. I have assumed that MINI DGUS displays do not support CRC.

The Touch Configuration File (13*.BIN) contains touch (input) commands and can be generated with the DGUS SDK. Each command occupies 16, 32 or 48 bytes and include 6 parts:

Note: To prevent maloperation, you must press the effective drag area for more than 0.5 seconds before sliding starts

Note: When using the keyboard (key code saved in the 0x4F register) for text entry, if you use the Caps Lock key, define the animation area of the button as needed.

Note: If the value in VP address is equal to neither V_Stop nor V_Start, the icon is not displayed.

Every time a Timer data (BCD code) is read, one ASCII character will be added as a seperator.