Back to the future

The Sinclair ZX81 is my first computer, in 1982 (kit). It is one of those home computers very popular in the '80s and affordable (£49.95 in kit). Other very popular computers were the Commodore 64 and the Apple II but were far more expensive (ZX81 was ten times cheaper than Apple II Plus). The successor of the ZX81 is the ZX Spectrum even more popular than the ZX81. 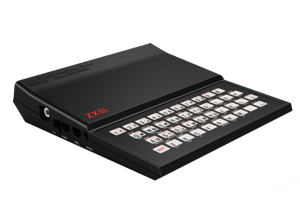 The ZX81 computer is based on a 8-bit processor (Z80A from Zilog or µPD780C from NEC) at 3.5 MHz with 1 KiB of RAM and 8 KiB of ROM. The 1 KiB of RAM can be expanded with a RAM extension (I had a 16 KiB one). There is only 4 chips (far less than other home computers): the ROM, the RAM, the processor and a custom logic chip made by Ferranti (ULA). 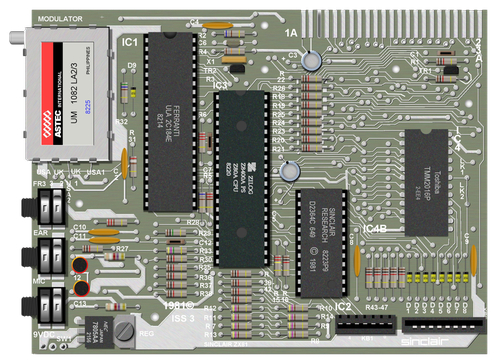 The ZX81 does not include a display. You connect it to an ordinary UHF television set to deliver a monochrome picture. The processor (Z80) spends most if its time driving the display.

The characters set is not based on ASCII but is custom and includes only capital letters. It includes also some graphic characters:

The keyboard is very simple: it is a flat, pressure-sensitive membrane QUERTY keyboard:

Data are saved or loaded with an audio cassette recorder at an average rate of 307 bps (the machine has no built-in storage capabilities). The recorder is connected to two 3.5 mm jacks (EAR and MIC) on the side of the ZX81.

The 8 KiB ROM contains a BASIC interpreter (called Sinclair BASIC) and there is no actual operating system, only a set of subroutines at known ROM addresses.

The machine was delivered with a very good manual: Sinclair ZX81 BASIC Programming by Steven Vickers. It was both a reference and a training course for completely beginners.

From BASIC, it is possible to directly access memory (with PEEK and POKE instructions) and to execute Z80 machine code using the USR instruction (often with the RAND statement, a trick to ignore the value returned by USR). Most of the time, machine code is placed in a BASIC REM statement at the beginning of the program.

One of my first programs was a Z80 disassembler. Unfortunately, I lost it. I have also programmed some games and I still have one of them: FACTORY (originally called USINE in French). It is written with a mix of BASIC (to display the menu, the rules of the game, etc) and Z80 assembly code (for the game itself). If you want to play with it, it available (in an emulator, see bellow) on my Biography page.

The source code of the game itself (BASIC and Z80 assembly) will be the subject of my next post.

This is a schematic of the keyboard: 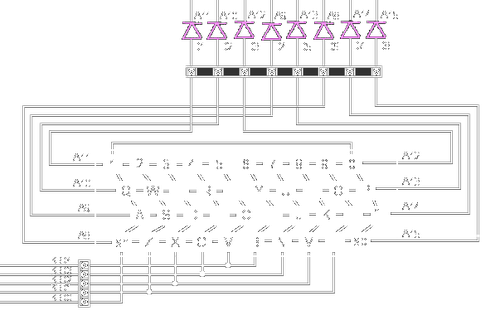 The positions of the keys are thus given by the following table:

The BASIC program begins at address 16509h (just after System variables). Instructions have these general format:

If the program contains Z80 machine code, it is often stored in a REM comment at the very beginning of the program. The layout is thus:

Z80 Machine code starts at address 16514 (4082h). The jump to this address from BASIC is often performed with this instruction:

RAND is used because in BASIC, it is not possible to ignore the return value of USR (call to user-defined code). RAND takes a parameter and has very little side-effects.

Program stored on an audio tape

Programs are stored on audio tapes this way:

The data contains system area, basic program, video memory, VARS. The last byte of a (clean) file should be 80h (the last byte of VARS). Files should usually not exceed 16 KiB.

The system area should contain proper data. In particular:

.p and .81 files are similar. They consist of the raw data as saved by the ZX81 tape saving routine (without the filename). They can store only one program. .p files typically contain some garbage at the end.

There are emulators available, written in various languages. In particular:

I have also written my own ZX81 emulator in Typescript. Thank to the transcompilation of Typescript into Javascript, it runs as a pure HTML5/Javascript application. The source code of the emulator is available on GitHub and you can play with the emulator on my Biography page.

The creation of this emulator (and more generally, the question of the conversion of a Java applet into a pure HTML5/Javascript application) will be the subject of a next post.

There are several web sites and forums discussing Sinclair ZX81, ZX80 or Spectrum. For example: